They're pioneers - Two women rise through the male-dominated ranks of D.C.’s fire department 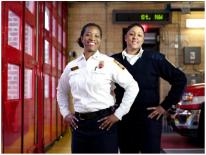 Young cadets Queen Anunay and Kishia Clemencia stood out in their class at the D.C. fire academy as being among the few women in a male-dominated field. Of the department’s 1,550 members at the time, 35 were women.

Fast forward nearly three decades, and Anunay and Clemencia are the ones in charge.

In their new roles, Anunay, 45, and Clemencia, 44, help oversee nearly 100 firefighters at 11 firehouses in the District. They were selected among a pool of 44 candidates — the only two women who qualified during an interview process measuring their preparedness for the high-ranking position.

“They will create a path for all of our young, female firefighters that shows them, ‘Oh, I can do that. That’s within my reach.’ ” D.C. Fire Chief Gregory M. Dean said. “They’re pioneers.”

Women — especially in the higher ranks — are a rarity in the field. Of 1,800 firefighters at the department, 188 are women. Twenty-three women serve in officer roles out of 471.

Kim McDaniel, the department’s manager of equal employment and diversity, said the agency was “well behind other jurisdictions” in the Washington area for the number of women in top positions. Having new female battalion chiefs, she said, is “going to speak volumes to recruit more women.”

Anunay and Clemencia said they hope other female firefighters will be inspired by their ascent. For Anunay, the new role brings mixed emotions.

“I feel proud, but also humbled to be part of a very small group of women,” she said, calling the promotions a “paradigm shift.”

Clemencia added: “The younger ones are going to get to see women giving orders and at some point, they’re going to be in charge, too.”

Clemencia and Anunay grew up in Southeast Washington with fathers who worked for Metro, although they didn’t know each other while growing up. They said they got into firefighting because they weren’t interested in racking up college debt and didn’t want to be confined to desk jobs. They wanted careers that offered good benefits and retirement packages.

During their careers, the women said they learned the technical aspects of their jobs and bought into the department’s “family” mentality as they earned their teammates’ respect. As leaders who make decisions on when to send firefighters into and out of a blaze, they said some male firefighters worry the women will be too nurturing and pull them from a fire too soon or won’t let them go in fast enough.

“When we walk in, they often assume we can’t do the job,” Anunay said. “They question whether we can perform or not.”

Clemencia said she filed sexual harassment claims years ago against two firefighters in the department. One of the incidents, she said, happened when she was 18 years old on her first day at a firehouse.

In one case, she said that the man touched and groped her and made abusive comments. Over the years as she worked with him at times, she said, the abuse continued. She waited years to report it.

She said she realized she had been mistreated as she rose through the ranks in the department and learned more about policies on sexual harassment in the workplace. Clemencia said the department handled both cases appropriately after she reported the abuse. The department wouldn’t comment on her cases, citing privacy and personnel policies.

Her method in fending off abuse was to snap back at her harassers, she said.

“I saw that’s not the way to handle it,” Clemencia said. “They may stop with you but they may do it with another woman.”

The two battalion chiefs are on a women’s advisory council tasked with helping women navigate the department and deal with issues such as scheduling to pump breast milk, teaching how to ask for training and promotions, and reporting cases of harassment.

Firefighting was long seen as a “nontraditional” profession for women, historically deemed too dangerous, according to human resource experts in the fire service industry. Getting dirty, running into burning buildings and carrying heavy hoses were considered “men’s work.”

The 24-hour shifts weren’t seen as appealing for family life, so women were often encouraged to work the “desk jobs” of dispatchers or trainers. Just being fitted for boots and coats was hard for women, because equipment typically comes in larger sizes for men.

There are about 340,000 career firefighters nationally, and of those, 24,300 are women, according to the International Association of Women in Fire and ­Emergency Services, known as iWomen.

“The struggle is real for women in this field,” said Toni Washington, the fire chief in Decatur, Ga., who is the city’s first black and first female fire chief. “We have to do more than our peers to survive and stay in our positions. More is expected of us.”

Back in the District, Amy Mauro, the fire department’s chief of staff and the highest-ranking woman in the department, said it’s encouraging to see other women rising up the ranks. She more frequently hears women giving orders when calls come across on the emergency radio.

“I get excited and do a little woo-hoo,” Mauro said. “It shows we’re making progress and making the department more diverse. It’s empowering for women.”

For some firefighters, especially younger ones who may have come from the military, where having female officers isn’t uncommon, the addition of female battalion chiefs is no big deal. For others, it can be a new style of leadership if they haven’t been exposed to female leaders in their careers.

“They’ve earned their way to get to that position,” said Justin Lenyk, a 37-year-old firefighter in Northwest Washington. “They’re both highly qualified and well respected.”

Deputy Fire Chief Thomas Dean said the promotion of the two women has “stood out more” in the department because there aren’t “too many women who get promoted through the ranks.”

“They can pull their weight,” he said. “They can hold their own.”