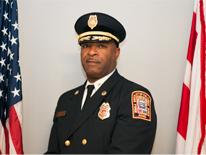 Chief Milton E. Douglas, Jr. serves as the Assistant Fire Chief of Technical Services for the District of Columbia Fire and Emergency Medical Services Department.
Chief Douglas is a native Washingtonian and a graduate of Frank W. Ballou Senior High School in Washington, D.C.  Upon graduation, he went on to pursue classes in the field of Fire Science at the University of the District of Columbia.
Chief Douglas was appointed to D.C. Fire & EMS January 20, 1987, as a Fire Fighter, thus was the start of a dream come true of a career in the field of fire service.  During his tenure which spans over three decades, Chief Douglas consistently demonstrated a commendable level of commitment to his professional growth and career advancement within the Department.  On March 19, 1995, he was promoted to the rank of Sergeant; followed by the rank of Lieutenant, January 17, 1996 and subsequently, the rank of Captain, April 4, 2004.
In 2007, he embarked on a career shift that would ultimately groom him for the level of senior management with the promotion to the rank of Battalion Fire Chief, February 4, 2007.  He was assigned to the Office of Internal Affairs and tasked with creating the office pursuant to the “Rosenbaum Taskforce on Emergency Medical Services Report and Recommendations of 2007.”  He worked alongside the Fire Chief and his senior staff to ensure discipline was fair and equitable, and made certain members received fair and unbiased investigations, as well as, made sure penalties for misconduct were swift, fair and appropriate.  April 27, 2008, he was promoted to Deputy Fire Chief of the Office of Internal Affairs.
His impeccable record, management and leadership style led to his promotion to  Assistant Fire Chief of Technical Services on November 11, 2014, where he oversees the Office of Fire Prevention, Office of Information Technology, Office of Unified Communications and the Office of Internal Affairs.  Chief Douglas prides himself with consistently providing the citizens and vistors of the Nation’s Capital with the most selfless service he can give every day for the past thirty years!
Twitter
Facebook
Mobile
Maps
Webcasts
RSS
Data
Subscribe
END_OF_DOCUMENT_TOKEN_TO_BE_REPLACED