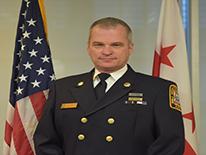 Assistant Fire Chief John Donnelly started his career with DC Fire and EMS in 1992 at T-16. Over the course of his career he has served at RS-3, TW-3, BFC3-Aide, and BFC2. Chief Donnelly has served as the Division Commander of Special Operations, Homeland Security, and Apparatus Division; and as a member of the Command Staff in Special Projects and Executive Officer Roles.

In 2018, Chief Donnelly was promoted to the newly established Professional Development Bureau. Chief Donnelly is responsible for leading the Human Resources Division which includes the Payroll and Compliance Offices, Professional Standards Division, Training Division and the Grants Office.

Chief Donnelly serves on numerous committees supporting regional and national preparedness, including the International Association of Fire Chiefs Terrorism and Homeland Security Committee, as the Executive Director of the National Capitol Region Securing the City Program and the Metropolitan Washington Council of Government’s Fire Chief’s Committee.

Chief Donnelly lives in Manor Park and spends his free time working with the Boy Scouts of Troop 98 in Brookland.